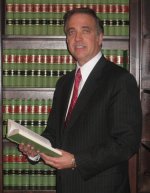 Robert began building a personal injury practice upon his admission to the New York bar. He began handling personal injury and wrongful death cases exclusively in 1985. In a wrongful death action that stemmed from an explosion at an oil terminal in Port Reading, New Jersey, Robert represented the widow and children of a welder who suffered burns covering 87 percent of his body when the pipeline he was welding exploded. Robert obtained a settlement in the case that paid the widow and three children a total of $2.5 million in damages.

Following the crash of Avianca Airlines flight 052 near Kennedy Airport, Robert filed the first lawsuit against the airline and the United States Air Traffic Controllers. The Columbian textile worker who sustained a fractured left forearm, a broken left knee, back injuries and numerous lacerations received $1,575,000 in damages. The worker’s 2 year old son, who sustained minor physical injuries along with emotional problems as a result of the disaster received $175,000 in damages.

When a 26-year-old truck driver suffered closed head injuries as a result of striking a railroad overpass that was not properly marked with bridge hit clearance signs, Robert commenced a suit against the City of Plainfield and its employees. After a week long liability trial, the judge directed a verdict for the defendants. On appeal, the Appellate Division initially affirmed the trail court’s decision. Realizing that the Appellate Division decision was wrong, Robert made a motion for reconsideration. Seeing the error of its ways, the Appellate Division reversed itself and the trial court and ordered a new trial. The case settled prior to retrial for half a million dollars.

Robert championed the cause of a 40-year-old longshoremen who suffered only minor physical injuries, after the jeep he was riding in was struck by a tractor trailer which was slowly backing up. The burley longshoremen developed post traumatic stress disorder which prevented him from being able to return to work. Following a long jury trial, the plaintiff was awarded $725,000 in damages.

Never willing to cave into the demands of big business, Robert commenced a declaratory judgment action on behalf of an injured longshoreman to determine the amount of the employer’s lien for workers’ compensation benefits. The district court granted plaintiff’s motion for Summary Judgment holding (1) the fee charged by the Department of Labor to employer for physician’s examination of longshoremen was not part of employer’s compensation lien, and (2) expenditures by employer for doctors to confirm findings made by the longshoreman’s own doctor were not part of employer’s compensation lien. Castro v. Maher Terminals, Inc. , 710 F. Supp 573 (D.N.J. 1989).

As the New Jersey State legislature and the Courts began to whittle away at automobile accident victims rights, Robert fought to protect the rights of injured motorists. After a trial court granted summary judgment to the defendant finding that the plaintiff who was collecting unemployment on the day of the accident did not sustain an injury that prevented her from performing substantially all of her normal activities for 90 out of the first 180 days following the accident despite the fact that she received almost daily medical treatment for 105 days and was advised to stay home and rest by her doctor. The Appellate Division reversed the trial court and remained the case for trial. Costa v. Perez , 272 N.J. Super. 108 (App. Div. 1994).

During the course of his twenty-eight year legal career Robert has both prosecuted and defended numerous cases in the municipal courts of New Jersey. In addition to negotiating plea bargains with municipal prosecutors, Robert has tried to conclusion cases involving violations of the Motor Vehicle and Traffic Regulations.

On January 1, 2006, Robert was appointed Municipal Court Judge for the Borough of Norwood. Serving as a Municipal Court judge, Robert is still permitted by New Jersey Court Rules to maintain a private law practice. Robert and the members of his personal injury law firm, Solomon & Associates, P.C. stand ready to fight for accident victims’ rights.