DeWitt, N.Y. (June 13, 2019) – A tractor-trailer and a box truck ended up in an accident that caused a back up in traffic in New York, according to authorities. The New York truck accident occurred on Thursday, shortly before 10:09 a.m., on the east side of the New York State Thruway, near Exit 34A. 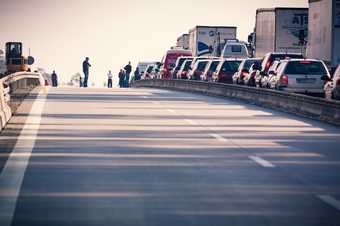 Police are still investigating this accident, but they did say that the accident was initially reported as a rollover in the passing lane of the interstate. They also said that the accident involved a tractor-trailer and a box truck. Injuries were reported initially according to dispatch logs.

Traffic was backed up on the interstate in both directions near where the accident occurred. No other word has been given about those involved or their conditions as of this article’s posting.

Tractor-Trailer Accidents and Their Dangers

Accidents that involve tractor-trailers are always more serious that those that do not. This is usually due to the size and weight of these vehicles compared to the everyday vehicles that they share the roads with every day. When large trucks experience issues like jackknifing, broken brakes, or issues that occur due to bad weather, they can end up causing a serious accident that will delay traffic, cause damages, and injure many people who are involved. It’s important for drivers to give these large vehicles the space they need to operate safely, and it’s important for truck drivers to ensure they are being as safe as possible on the road to ensure that everyone else is safe too.

Following an accident with a tractor-trailer, call the lawyers at the Law Offices of Robert A. Solomon of Metro Law. We can help you get the compensation you need following your accident, and we will work hard for you until your case is over. Call our office today to see how we can help you at (800) 469-6476.

What you should know about dog bites

Your neighborhood is pretty quiet, lined with kids and trees and families walking their dogs. The Centers for Disease Control and... read more

The fatal four in construction

Construction workers have one of the most dangerous jobs in America. According to the United States Department of Labor,... read more

As an expectant New Jersey mother, the health and welfare of both you and your developing baby are likely... read more

The Three Forms of Distracted Driving

What is Distracted Driving? We all know the basic ways we can end up getting pulled over by police or... read more

Construction workers and back injuries

If you work construction in New Jersey, no one needs to tell you that your back takes a beating... read more

Can you trust your surgeon to admit an error?

If you underwent a recent New Jersey surgical procedure or plan to do so in the near future, you... read more

Car accidents can begin and end in a matter of seconds, but for those who suffer a serious injury... read more

Can a car crash paralyze you?

Should you receive neck or back injuries in a New Jersey car crash, the results could be catastrophic. Depending... read more

Biker’s arm may prevent you from ever riding again

Spring is a wonderful time for motorcycle riders. After you have suffered through New Jersey’s cold winter, you use... read more

Everybody knows that texting and driving is a serious hazard. It has caused countless collisions, injuries and deaths, and... read more